In August of 2019, a unanimous Ohio Supreme Court declared that secret ballot voting violates Ohio’s Open Meetings Act in a win for Finney Law Firm and its client, Pat Meade.  The decision was authored by Justice R. Patrick DeWine and can be read here and below.

The issue: Do votes of public bodies have to be made in public?

In the Bratenahl case, the City Council had selected its president pro tem by secret votes on slips of paper handed to their law director, so others on Council and the audience could not see how their council members individually voted.  The secrecy was quite intentional. The result, ultimately after three separate rounds of paper ballots, was then announced by the law director. Thus, the question was squarely presented in court as to whether votes could be made in secret.

To us, the question of whether “opening meetings” includes public votes was obvious, but it was not so obvious to the Cuyahoga County Common Pleas Court, which ruled against our client on summary judgment.  The Cuyahoga County Court of Appeals (8th District) agreed with the trial court by a 3-0 decision. 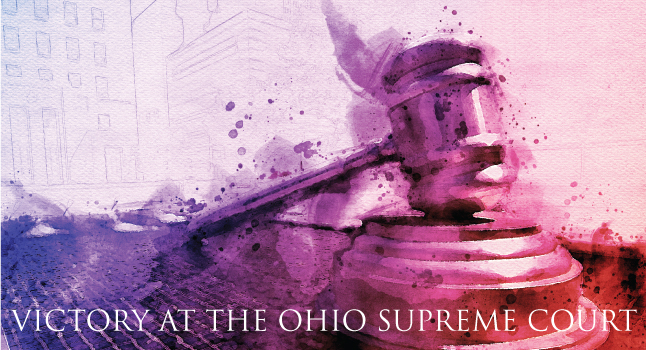 So, having lost unanimously before all four Judges to hear the issue, we, along with our client, determined to proceed before the Ohio Supreme Court, an against-the-odds process as the Ohio Supreme Court accepts only approximately 5% of appeals presented.  Thus, it was a significant accomplishment just to have the case heard by the Justices.

In March of this year, Mr. Hartman presented argument for the client before the seven Justices of the Court.  The City’s defenses included that (a) they can legally vote in secret and (b) because of the passage of time, the case was moot.

The Ohio Coalition for Open Government, The Ohio Association of Broadcasters, and the Reporters Committee for Freedom of the Press filed an excellent amicus brief in the case.

Victory before the Ohio Supreme Court

Today’s 7-0 decision held — something that seemed simple to this firm and our client — that it is not possible to comply with the mandate that Ohio meetings of public bodies be open, without deliberations and votes being in public as well.  They also quickly dispatched of the mootness argument.  It is a short and well-reasoned decision that firmly decides this this issue that otherwise was of first impression before the Court.

The message for public bodies in Ohio by a series of decisions of the Ohio Supreme Court is that they mean business about openness in Ohio government.  They have ruled against public bodies trying to do end-arounds to evade Ohio’s openness requirement through deliberations by e-mails and a series of round-robin or revolving door meeting of fewer than a majority of the body.

We appreciate the firmness expressed by Justice DeWine and a unanimous Ohio Supreme Court demanding openness from all of Ohio’s governmental bodies.  The message should now be unmistakable for elected and appointed bodies desiring to conduct their work in secrecy.

The experience also shines a bright spotlight on the sophistication and persistence of Finney Law Firm’s litigators in the strategy, briefing and argument of this case beyond defeats at the trial court and the court of appeals.  The trial and appellate practice team we have assembled can be used to help “Make a Difference” for your own litigation challenges.

It has been an honor to represent our client Pat Meade in this important case.