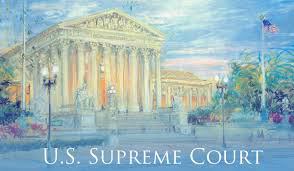 Next Thursday, Christopher P. Finney will present to Cincinnati’s Lawyer’s Club the topic “Mr. Finney goes to the United States Supreme Court,” a speech on his experiences in having a case accepted by the nation’s highest court, having it presented (another attorney made the oral argument) and winning in a unanimous ruling.

“It has been the highlight of my legal career to date has been to position a case for acceptance by the United States Supreme Court, to have it presented and to win,” said Finney.  “The experience was made all the sweeter because up until the nine Justices spoke, not a single judge, at the trial court level or at the appellate level, saw any merit in our arguments.  Strategy, persistence and a firm belief in our position prevailed.”

The Susan B. Anthony List case challenged Ohio’s political “false claims” statute, in which the Ohio Elections Commission sits (used to sit) in judgment of whether statements made during the course of political campaigns — candidate and issue — were “false” and if so, could refer them for criminal prosecution, involving up to six months in jail.

Our legal team presented that case in April of that year, and won a unanimous ruling from the U.S. Supreme Court in June, authored by Justice Clarence Thomas.  The case as it ascended to the United States Supreme Court was merely about whether our clients had standing to challenge the subject statute.  The Supreme Court decision found that standing existed and remanded the case for further proceedings in the trial and appellate courts, where some months later our clients ultimately prevailed.

Navigating legal shoals to have a case accepted by the United States Supreme Court and positioning it most strongly for victory, including by its written and oral presentation, involve intense strategy and hard work, much like a chess game or a championship boxing match.

That experience in this one case, and two more that the firm had accepted and won on only written briefs, will be presented by Christopher P. Finney next Thursday, February 16, 2017 before Cincinnati’s Lawyers’ Club at the Montgomery Inn Boathouse at 11:30 AM.

The Cincinnati Lawyers’ Club was founded in 1920 and gathers attorneys together for civic undertakings and continuing legal education programs.  We thank them for this opportunity to present our experiences on this exciting journey to the United States Supreme Court.

Please feel free to join us that day!