Truth can be stranger than fiction.  And the last few weeks at the Finney Law Firm that has been the case.

Yesterday, Chris Finney, Jessica Gibson and Julie Gugino racked up a unanimous jury verdict (8-0) to defeat a case of claimed retaliation in response to a tenant’s claimed request for a disability accommodation that was met with a non-renewal of a residential lease.  The case was styled Ohio Civil Rights Commission v. Abundant Life Faith Fellowship in front of Judge Christian Jenkins in Hamilton County Common Pleas Court.  The Civil Rights Commission was also suing the Church’s pastor who had served for 41 years.  In candor, the Civil Rights Commission did a terrible job of vetting its own case with a terrible, dishonest plaintiff and a very sympathetic defendant.  Its attorneys at trial also were not exactly prepared or stellar.

The Civil Rights Commission case was full of demonstrable untruths about a kind-hearted 74-year-old African American minister who had suffered two strokes.  By the testimony of two of her fellow tenants in the building, the complaining tenant had plotted starting fewer than two weeks into her tenancy to drum up a fictitious lawsuit against the landlord as a way to extract money from him — she told this to her fellow tenants.  And for a year, she made his life a living hell, with incessant complaints about inadequate heat and fabrication about needing more light for a vision disability (in fact, her complaints about lighting had been adequately addressed early in her tenancy).  Dozens of complaints were addressed by visits by with servicemen, engineers, and repairmen to cater to her many whims and incessant gripes.  The Cincinnati Health Department came out and confirmed the unit in every room was heated to a comfortable 72°F to 73°F (the tenant lied to the jury — never a good idea — and said the readings were 62°F, 64°F and 66°F).

In the funniest part of the trial, the tenant at first denied and then admitted sending a bizarre text message to the landlord in the depth of winter, after he noticed that the windows of every unit in the building were open, including those of the tenant who constantly complained it was too cold!  Here is the text message, grammatical errors and misspellings included: 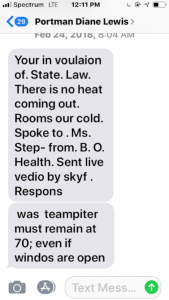 Yes, her crazy assertion to the landlord was that he must maintain the heat in the unit at 70°F even if the windows of the unit are left open!

Of course Pastor Brown and the Church had to fund the 4-year defense of the Civil Rights Administrative Complaint and the lawsuit, which he did with aplomb, but at great expense.  For the benefit of all landlords subject to outrageous prosecutions from obstinate public agencies, he saw this case through to its appropriate and proper end.  He refused to be bullied by the Ohio Civil Rights Commission, the office of the Ohio Attorney General and Housing Opportunities Made Equal (H.O.M.E.) (which manufactured evidence and knowingly lied to the Civil Rights Commissions in “building their case”).

For more information or to avoid being bullied by these same agencies: (a) DO NOT TALK TO THEM in an investigation EVER and (b) contact Jessica Gibson  (513.943.5677) for assistance with your case.